For those with long memories, the CX, 2CV, and DS bring back comfortable, innovative, and sometimes strange ideas just because it’s strange, which is absolutely wonderful. Does the latest car of this marque carry on this history?

My Previous Encounters with Citroen Vehicles

I have never really driven many Citroën’s in my life, just a first-generation C5 station wagon, and a Berlingo van 15 years ago. The van aside (it was cheap and simple), the C5 was amazing, never had such a normally prized car had such a suspension and comfort, not even an A8 felt this plush to drive.

And to top it all off we got snow and ice over a New Year here (In Norway), so the test drive got the worst possible conditions.

Mobile Sarpsborg is a nice bunch and has learned about electricity all since the Ampera-e (Chevy Bolt) came out here 4 years ago. Now, both Opel and Citroën are part of the brand new Stellantis group (FCA and PSA merger), and PSA has had a strategy that is slightly the same as Kia/Hyundai, to make both electric and petrol powered on the same platform.

I always have said a car with such a legendary status for comfort (that Citroen, in particular, has), would suit an electric drivetrain perfectly. When you remove the noise and vibration of a combustion engine, you add a level of comfort not otherwise found in a car priced around 300,000NOK ($30,000).

The C4 is less boxy than it used to be, and less funky too, but it still looks modern and has its own identity design-wise. You would never mistake it for something else. 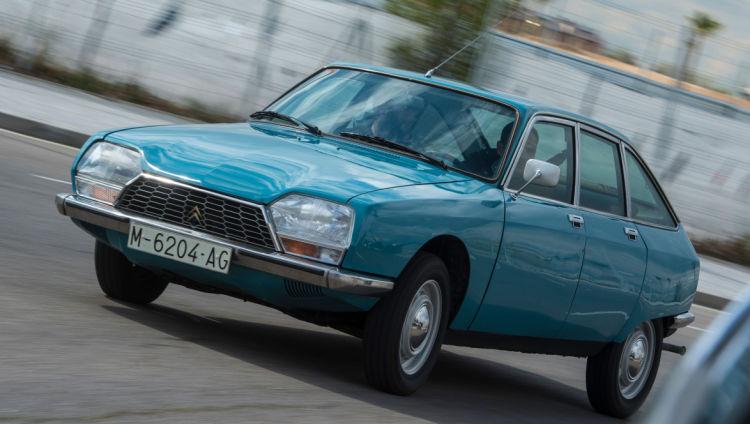 This is the older model Citroen C4 with its new design quick reminiscent to the past. 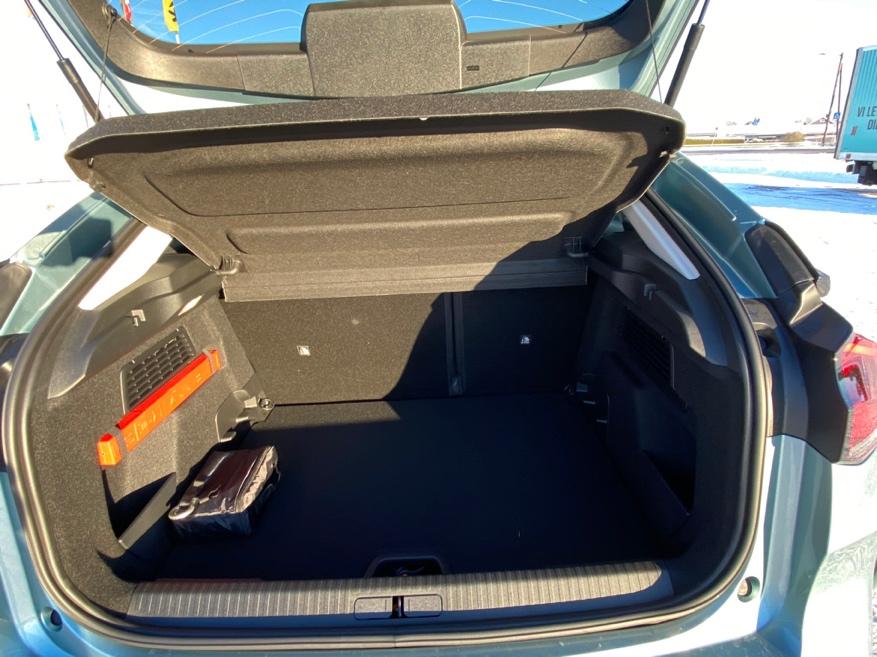 The boot is still big enough for most things (380L), and the rear seats can be laid down flat too (1250L). There is some underfloor storage for the tire repair kit and a few other things, but no added luggage space as such.

The rear seats are flat and are slightly higher than the front seats, so that’s a good thing for the smaller ones.

I can’t really say I can fit behind myself with the front seats in its lowest setting. But that’s not unnormal in this segment of cars. There is no middle armrest either, but there is a ski hatch, and power outlets and air vents.

The seats of the car, textile seats with a leather patch on either end of the seats, with some contrast stitching too. It helps breaks up and bring some colour into the cabin.

The interior as such reminds you partly of any other PSA product the last few years, but they have managed to create their own identity out of it. The clever shelf above the glove compartment and the blue ribbon that runs across the top of the doors. Sadly, that ribbon would be even cooler if it was a strap to close the door with, but there you go,

The materials are a mix of a soft touch, some hard plastics, and also a rubbery material on parts of the dash, and it gives it a feeling you never would find in an ID.3 for instance, mostly in a good way.

The instrument binnacle is very clean like it always has been, just showing you the speed, battery status, range, and odometer, that’s it. No trip computer or anything else, and as in all PSA products no way of showing you battery percentage either, except when you are charging, but the car comes with an app, and that shows percentages, so it’s not the end of the world I guess.

It also allows you to preheat the car and I haven’t heard to many complaints on it either.

I love this instrument though, they show you exactly what you need to know, battery percentage is a loss here since the range indicator can go all over the place, but one learns and can run it against a destination to double-check the range if needed for longer trips, it shows percentage when charging though, we will get to that.

This “Feel”, which is the middle of the three equipment levels, has a HUD as well, which works out very well. It shows your speed, given the speed on the road you are on, and also turn by turn navigation and adaptive cruise settings. 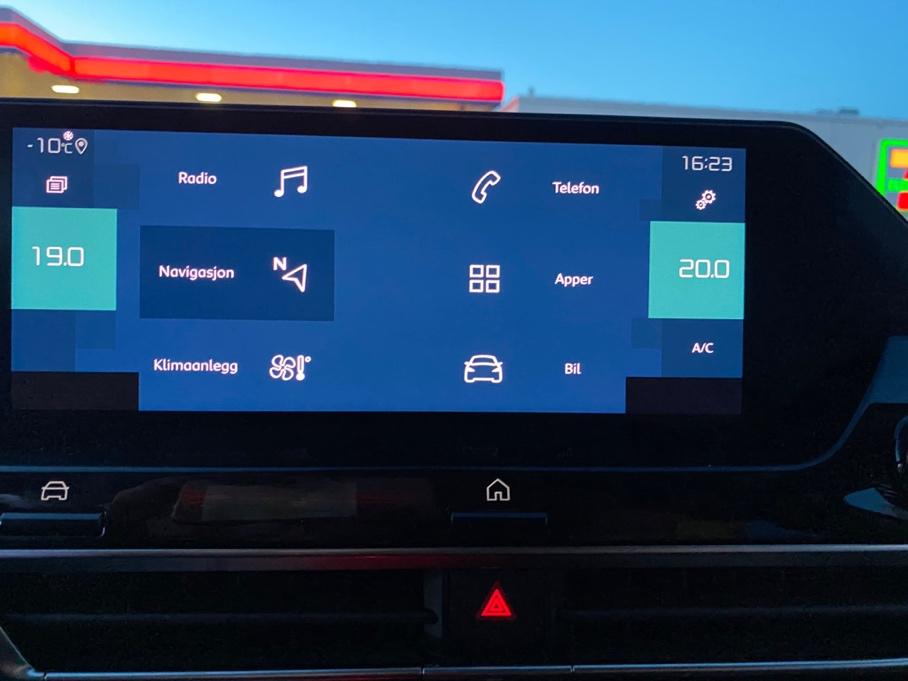 The C4 have one of the best iterations of the PSA groups infotainment system so far, it has a home button with a house that actually takes you to a home screen where you find almost everything. And there is the button with the car on it, that takes you too all the car settings with safety equipment and so on.

The sound system are good too, with good base and far from worst mid-range clarity, should give you a lot of enjoyment.

It has dual zone climate controls, and the controls are easy and straight forward, with a slight minimalism and dual function to them. 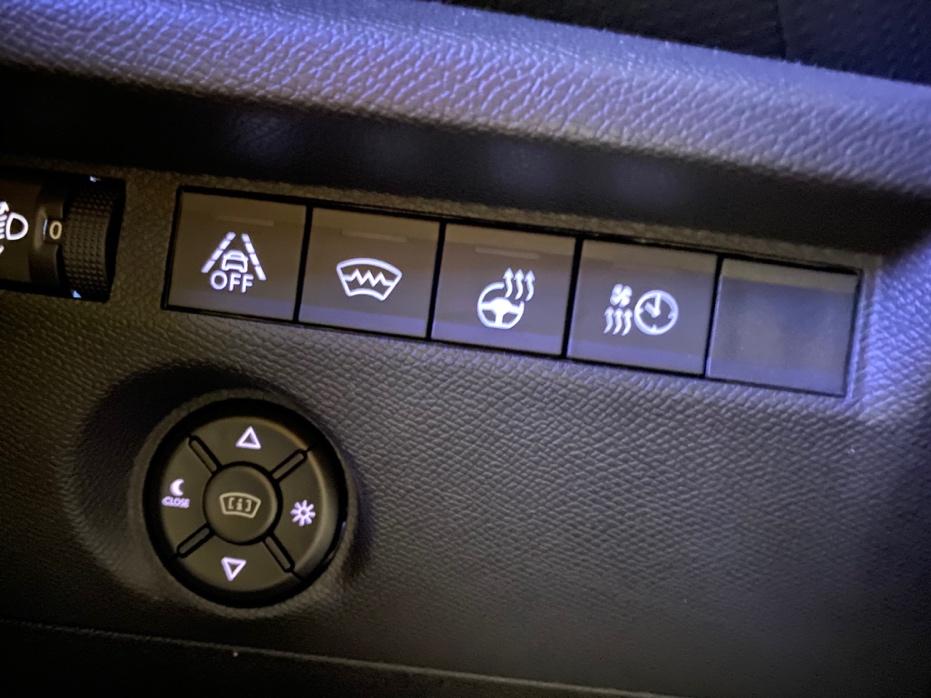 It also comes with a heated windscreen and steering wheel, the buttons are on the left side of the steering wheel, and as a result you can’t see them when driving, but you learn where they are quick enough. This is something that even the Model 3 has just began to offer at a $300 upgrade for the lowest spec SR+. 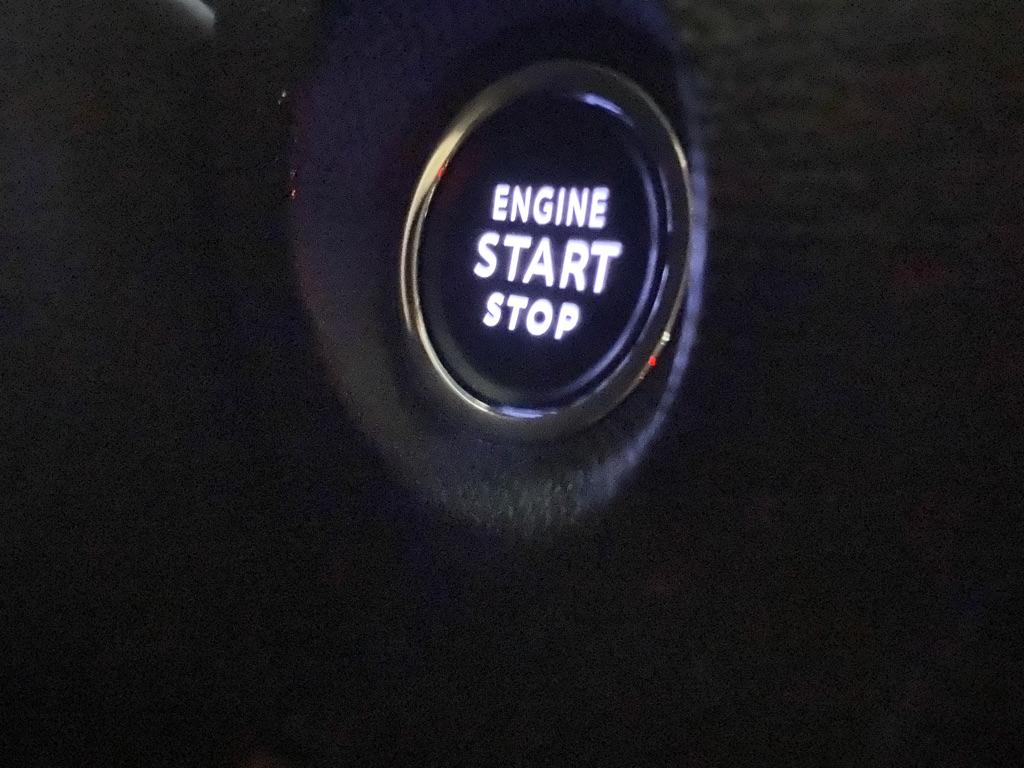 As with many cars being built on a shared platform, it has an engine start button, even though it doesn’t have one. It does have an electric motor that outputs 136hp and 260NM, and yes that’s the same as the e-208, 2008, and so on.

And yes, the ride is fantastic, absolutely amazing. Yes, you can feel the somewhat short wheelbase over smaller ridges and undulations, but it rides the awful snowy and icy roads in a way nothing else in this car even comes close to.

I was lucky in a way and tested the Mercedes EQC (Check out my article on that) the day before I tested this one, and all things being equal the difference in ride quality really is very minor indeed, and in some ways, the C4 handles itself better and doesn’t have the wobbling egg feeling the bigger Mercedes could have in some situations, and the Mercedes cost twice as much.

The steering is very served and easy to use, I think it might be speed-sensitive, because out on the road it lets you flow along at quite some speed, while around town it is almost too light, and feels like a toy without feeling to it.

The seats are manual, they are flat, but comfortable and reminded me of how nice god textile seats are in the winter, as they never get cold like leather do.

Out on the road, the car is a dream, in some ways it reminds me of the 20-year-old Audi S8, it flows with the road and isolates you from the surface in a wonderful way. It is also relatively quiet up to motorway speeds, on a rougher asphalt it has some wind and tire noise intrusion, but still very good.

Handling, yes, it handles surprisingly well, and because it is so quiet, and the suspension have very little roll, so it does not lean over in a corner.

As you result you find you arrive in a corner with much more speed than you think, and the car just flows along the road like the old Audi did in many ways.

The whole car feels a class or three above, the ride and handling are just among the best I have ever come across in a car for this price and this segment, and I feel envious of those who buy one. 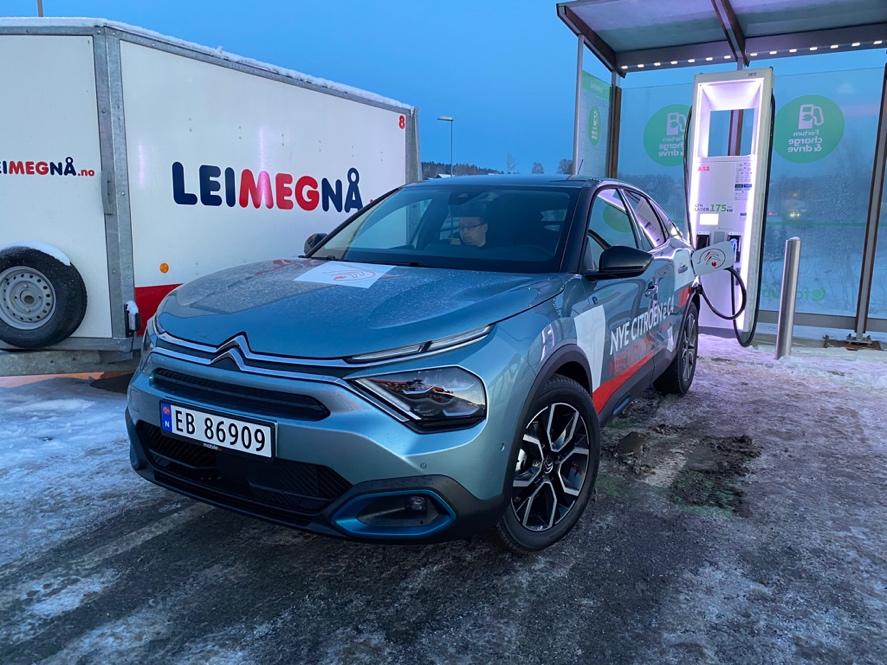 It is sad that the efficiency is so bad, but this is the worst-case use for many though. In warmer weather, I guess it will do closer to its estimated 300km (186 miles) range.

To end on a good note, the lights here are good, full LED on both high and low beam, descent spread and range. It could have even more range, but far from worst in class, and the auto high beam works very well and reacts quick to oncoming traffic, and I seldom had to turn anything on myself.

Sadly, the PSA group could learn from Hyundai, they have the Ioniq that also comes as a hybrid and BEV. It turned out to be the most energy efficient car known to man, something the French just can’t replicate.

What the Citroën ë C4 does have is a ride from the gods, good seats and a personality and feeling of individuality you seldom see in today’s platform shared and slightly dull car marked, and I love it for that, it brings a feeling of luxury to the masses in a way no one else does.

The car is an overall and great car and fills a market in ways that many cars just simply cannot even do at the moment which Tesla is known for. This car was well equipped for the European market and strives to be the best in class. What are the other options?

The ID. 4 is a good bet and with the efficiency and range much better we will have to see what consumers will choose. Many of these legacy automakers have made a decision to move their whole brand over to the ledteic rc future. What Citreon is trying to do with this car to to cpature the grouf of people. who have i vested in citreon as a brand over the years.

I personally think for the range and efficiently this is not enough for many people here in the United States, but is more than adequate to do daily tasks. Range is always nice and there is never too much of it, so if they could olive this efficiently but at least 50% we could see a true competitor to the ID.4 and the Skoda Enyaq which I believe are going to dominate this small form factor SUV market.