If you ever told me this is the first car XPeng ever made, I would say you are stupid, it is too good and far too competent to ever be the first product. The materials are good and the ride is fabulous, just don’t have long legs… 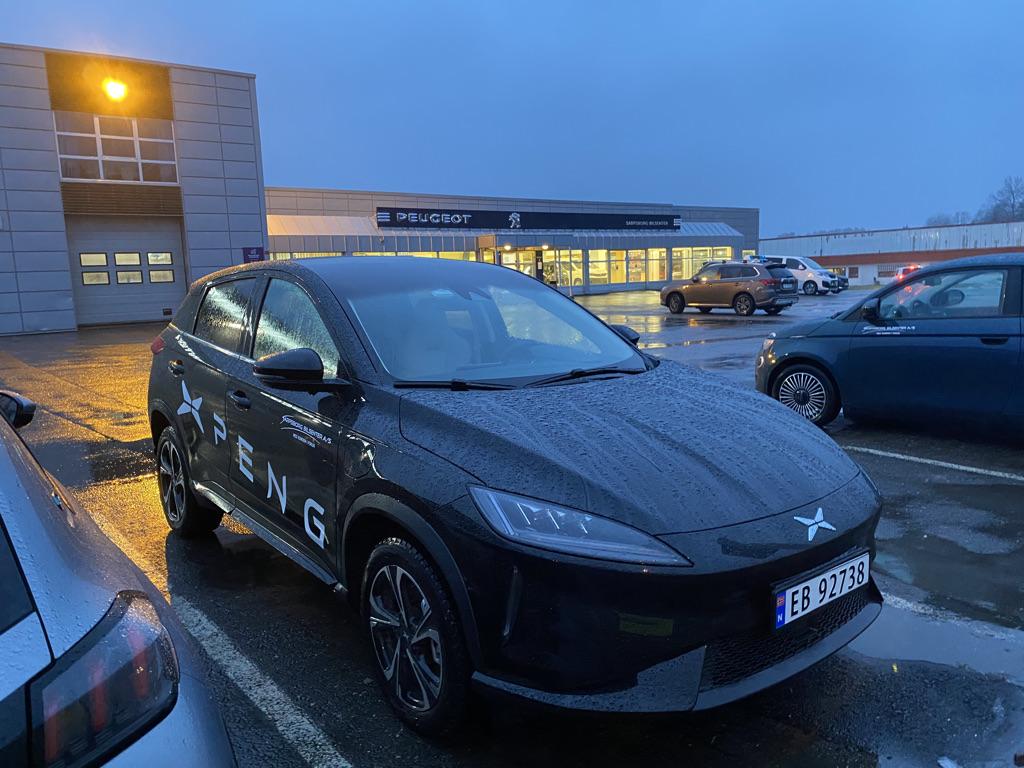 I am guessing now, but the car industry probably hasn’t seen this many new companies in the last 100 years as they see now. Many of them will go away or stay domestic, and most of them are backed by Chinese money.

XPeng is one of these, and they have already made a statement by using a lot of Teslas open patents and are clear about building a presence in Europe.

Sarpsborg Bilsenter have decided to take a chance on this new Chinese brand, and lend me the car overnight, and it does attract happy customers, that’s a good indicator.

The first such car to arrive is the G3, this is a crossover and are probably size-wise a bit smaller than a Kia E-Niro for instance, but in the same segment of front-wheel-drive crossovers without any off-road pretensions, the ground clearance is only 13cm after all, and my model 3 is 14cm as a reference. At 4,45 meters long it is a breeze to park up though and have a brilliant turning circle.

The big rear light-cluster and reflector-strip looks pretty cool, the front is trying a little bit too much, but I am no designer mind you.

It looks like nothing else, not ugly or particularly pretty, but distinctly its own creation.

The boot is big enough for your shopping, they say 380 liters of capacity, on top of that it has a big deep well under there too, so it has decent space, it also comes with a sliding cover if you don’t want anyone to see what’s for dinner. The automated hatch is also a very nice addition, can be operated by fob, screen, or button on the hatch itself, no towing though. 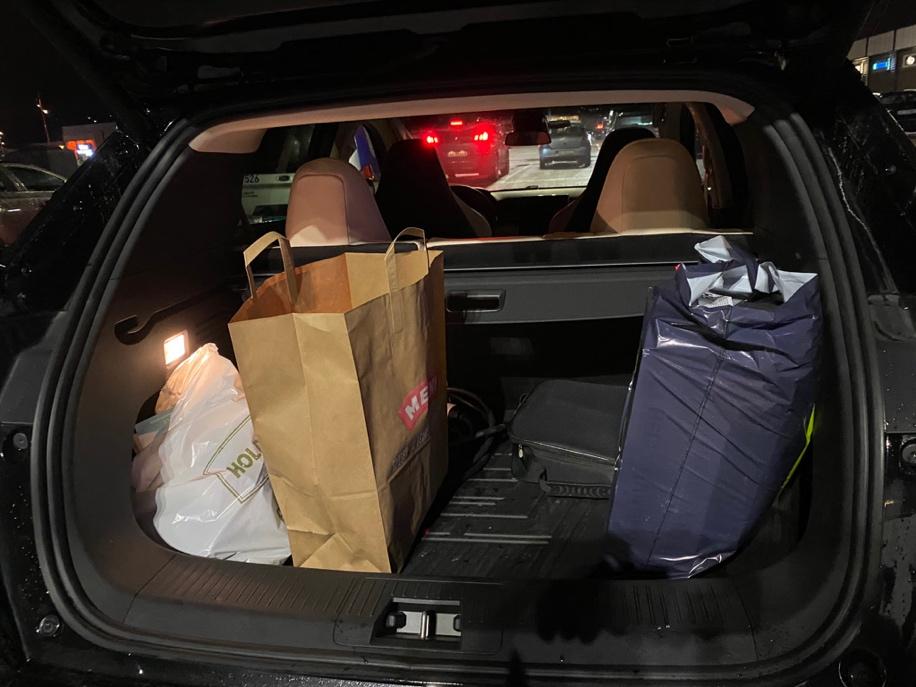 The rear seats can be folded down, and I can actually sit behind myself too with space for my long legs (1.89m) and that’s not everywhere. Headroom is also fine due to the relatively squared off the back of the car, ventilation, and power sockets are always a welcome sight, no armrest though. 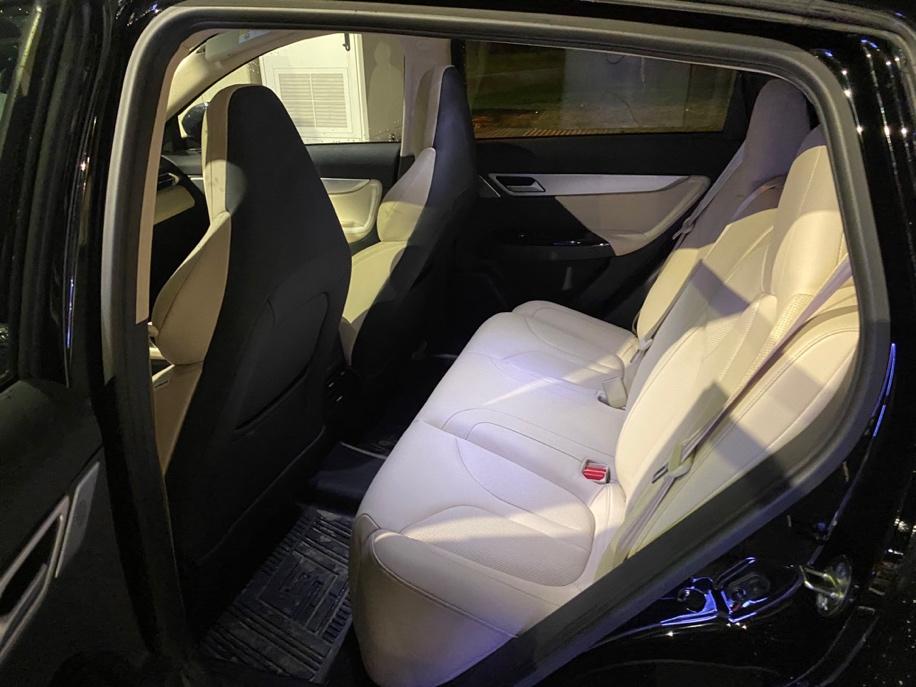 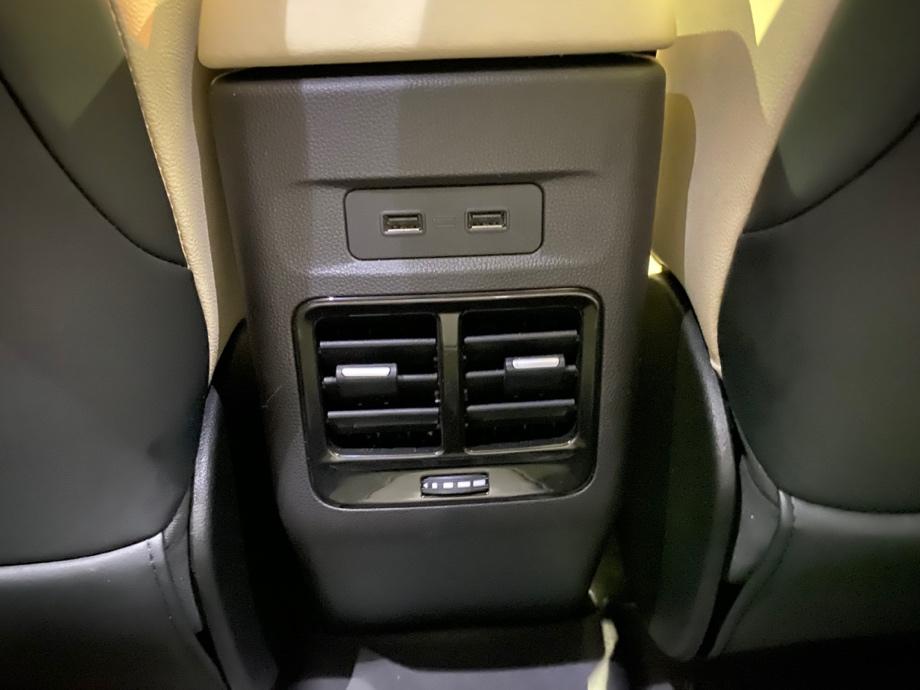 One of the reasons for the good space is that the runners for the front seats are a tad short. Now I am not picky on my legroom, even though I have long legs, but in this car sadly I can’t sit properly in the front seats because it doesn’t go back far enough, so you end up sitting with your knees high. 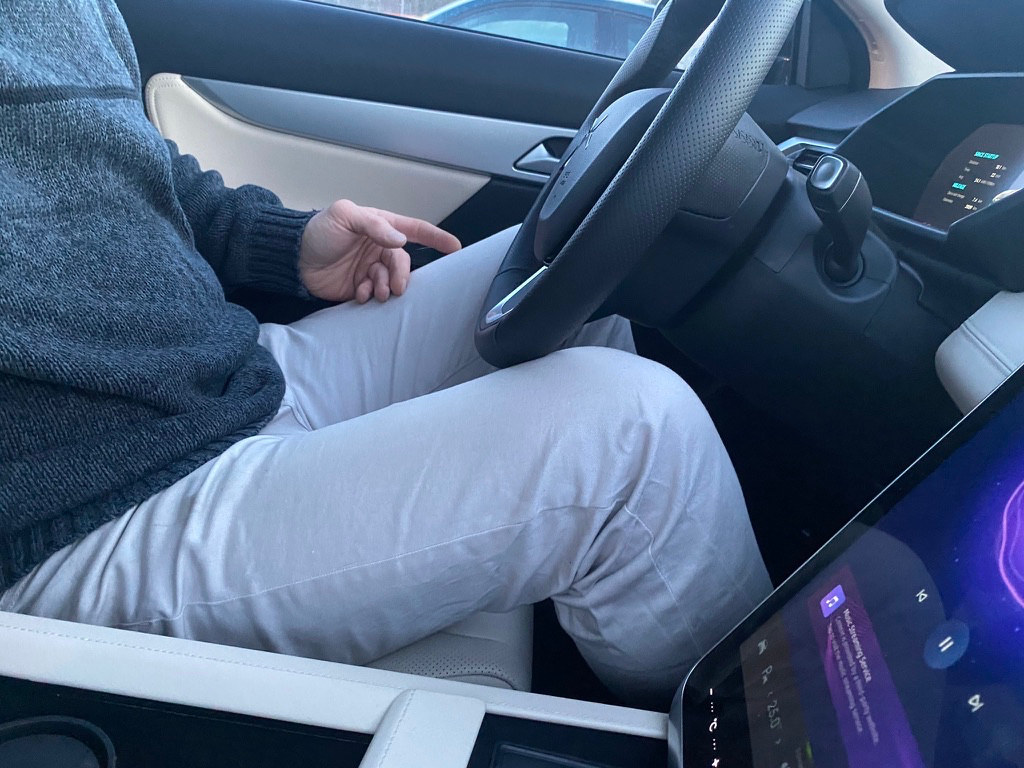 And that’s sad, because the seats are comfortable and shaped very well.

The car has a leather interior, and the white colour does make the car feel lighter and roomier than it probably is.

If you have ever seen a picture of a Tesla, you will be forgiven for thinking that I have taken picture inside the wrong car.

But as I said they have used Tesla’s open patents, and much of the same ideas about layout and infotainment, even the massive, big windscreen from the model X, except the interior feels really solid and proper in a way no Tesla Model X ever did.

I have been in brand new Toyota’s with more flimsy feeling interiors than this, and this is their first ever model from a start-up, impressive. 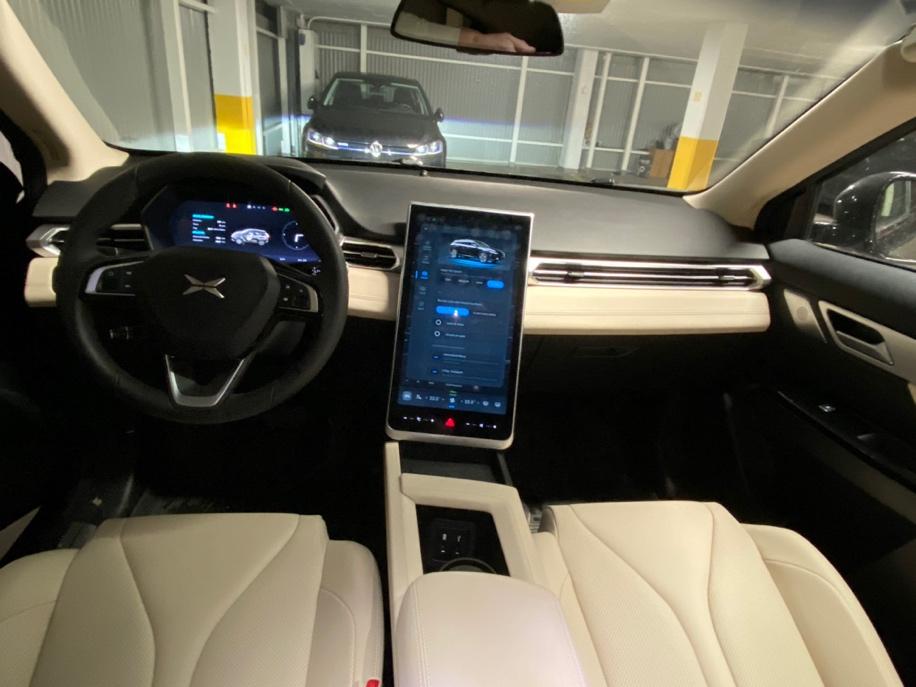 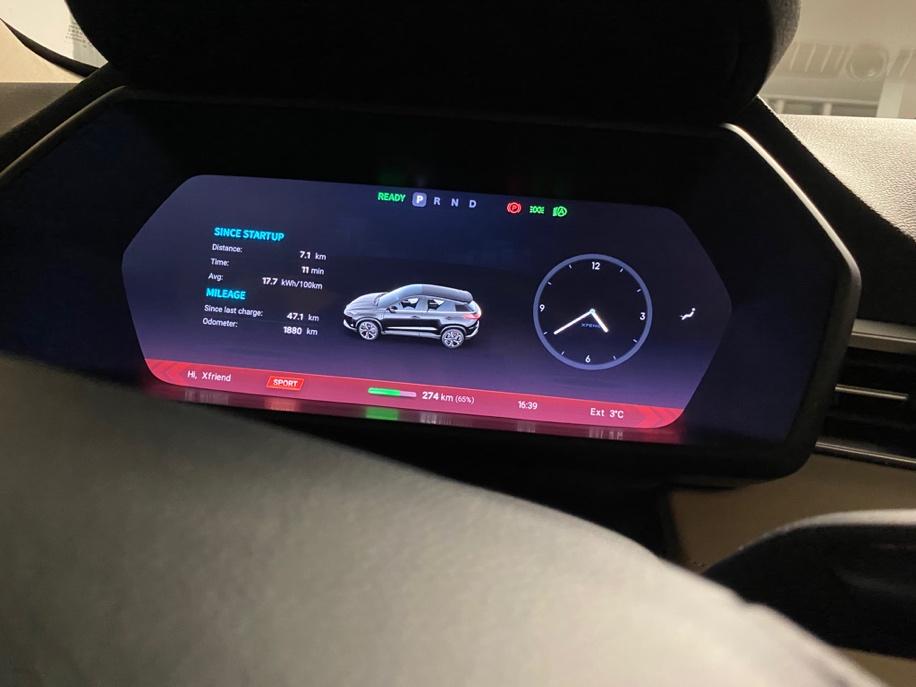 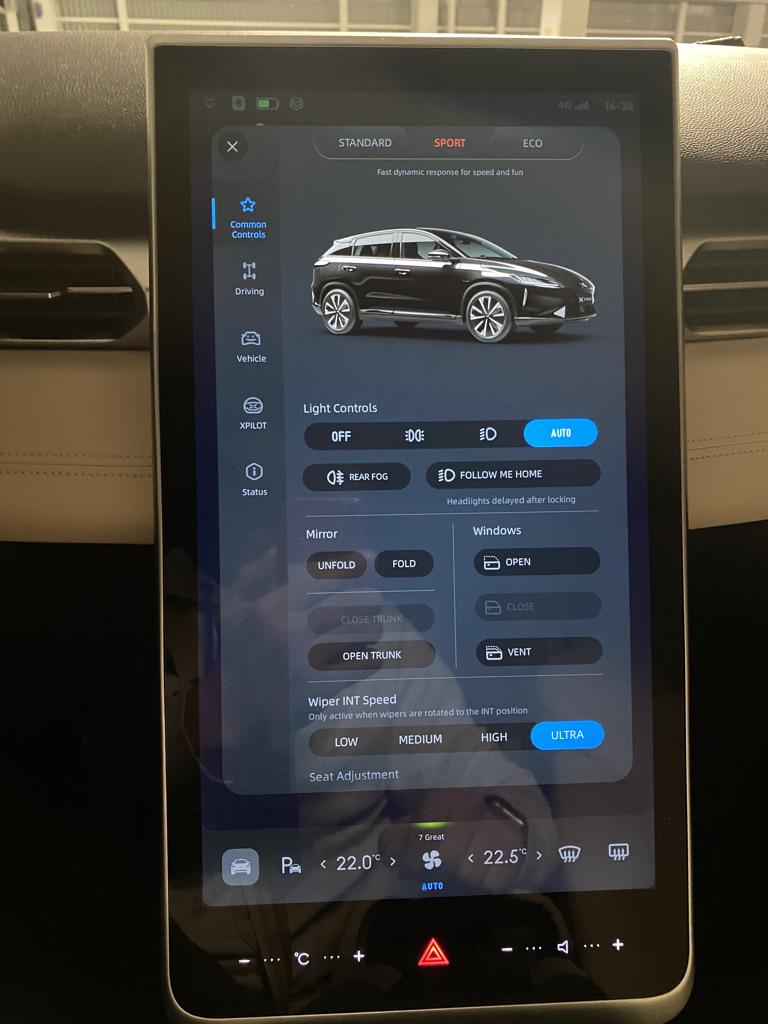 The materials in the cabin feel very good and solid most placed you touch, there are some plasticky surfaces, the cupholders and that area are lined in a textile material, not very expensive but it feels nice, and it stops things from making noise as it moves around, so that’s a great idea.

The screen behind the driver is clear and easy to use, the right part of it can be set up to change fan-speed and temperature and so on from the steering wheel, very handy.

The big screen, I think it’s around 15′, is a breeze to use and far easier than much of the European car industry manages to come up with, I and the car is set up to get over the air updates in around March here in Norway, so it will be interesting to see how it evolves.

The built-in voice assistant is useless, and quite bothersome as it pops up at every mention of XPeng, and quite loud too. The car in general does make its warning sounds heard, and they can be rather annoying it might be a possibility to lower their volume somewhere gut I didn’t check all the menus.

Like mentioned above the car is front wheel drive, its outputs 197hp and 300Nm of torque.

0-100km/h in 8,6 is a result of it being a bit sluggish of the line, but once moving it never really needs more power. The regeneration has several levels, but it comes in soft and well-judged. Long gone are the days where the regeneration came down like a hammer when you lifted off the go pedal.

Steering is relatively direct, the suspension is sporty but supple enough over bumps, so it makes a very pleasant ride over longer journeys.

It turns out the person who set up this chassis used to work for Porsche, and that sort of shows in how it handles, very little roll or movement, and it can be enjoyed on a twisty road.

The huge windscreen does suck some heat out of the cabin, so I had to run the climate control at much higher temps than usual, but it stays warm and comfy, so just a small observation.

The weather was around 4 degrees and rain, and rain draws a lot of energy as all EV owners know very well. With a 66.5kWh battery on the motorway, I would imagine 150-200km is within reach and more than that on country roads. Summertime 300km should be easily within reach. It clearly had a higher energy usage on the motorway than off it, but again this was in the wet.

I didn’t have access to it, but it also comes with a rather decent app that allows you to preheat and check charging and the usual stuff.

It has adaptive cruise, and that works like all other such systems, maybe a bit defensive sometimes, but I am sure they will improve it over time.

The XPeng pilot is not very useful at this time, we tested a version with Chinese software last year, and that impressed. But this one doesn’t follow the line and goes all over the place. This is something XPeng will improve quickly, and just run it on adaptive so it is not a major issue. 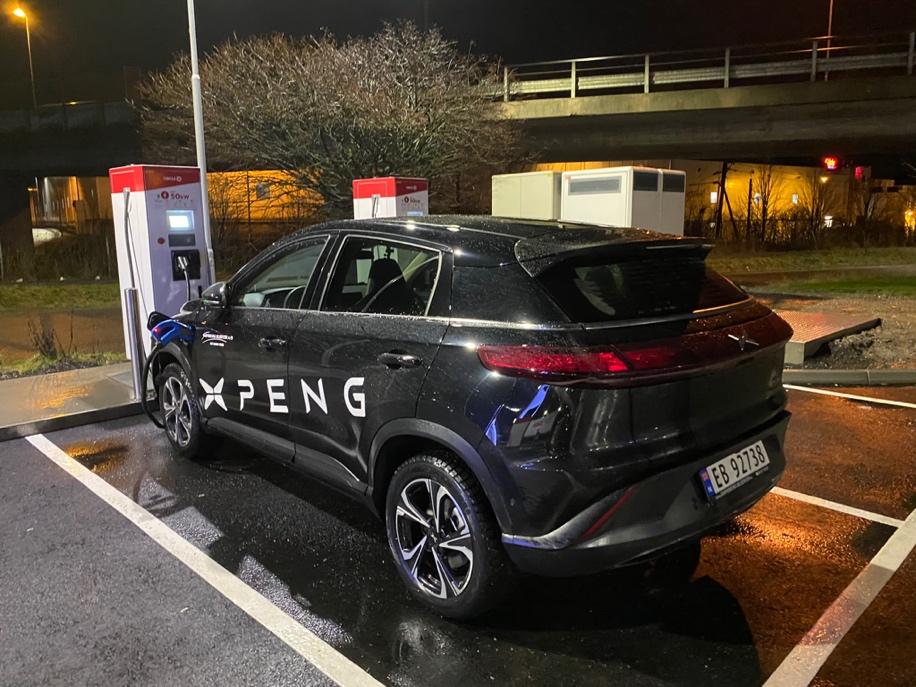 The car has one charge-port on each wing, the left for fast charging and the right for normal charging. It fast charges using the CHAdeMO standard, which means it is limited to 50kW for all intents and purposes. One cool thing is that the big screen actually can show you the charge curve.

So, if you want so to sit high, have a modern interior, and don’t have a very big dog, or have a massive need of four-wheel drive or very long legs, then this might be for you. It is comfy, fun, enough range for many, and a decent sound system and very good seats. But comes from a brand no one ever heard of, but that is suddenly almost the new normal it seems.

My first opinion of this car is good, to start off with I have seen a lot of good reviews from the likes of friends and also other car reviewers to enjoy the car and think it is fantastic We have previously written an article on the initial reviews of the G3 where Mat was able to take the car out brief for a review and some heads up features. Click here for the article. In answer to the question to see if this is the right car for people to purchasee, if you have as all faily or need to move light groceries, this would be the perfect car for many people.

Currently, we do not know if the car will be arriving in the United States anytime soon and the car is only available in Norway (for Europe) and China (is original market).

If you liked this article I would really like to take a second to thank you and if you want to DM me that would be really good too. Check out the instagram at the top.

Living with the Peugout E-208